Termite Shelter TubesSubterranean termites build distinctive tunnels, often referred to as “mud tubes,” to reach food sources and protect themselves from open air. They use their scissor-like jaws to eat wood 24 hours a day, seven days a week. Like other termite species, subterranean termites also feed on products containing cellulose. Subterranean termites swarm in the spring when groups of reproductive termites go off to start new colonies.

Subterranean termites live in underground colonies with as many as two million members. They are also found in moist secluded areas above ground. 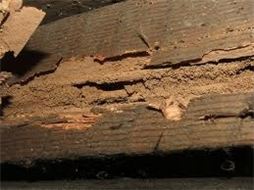 Termite Damage to wood floorSubterranean termites are by far the most destructive termite species. The hard, saw-toothed jaws of termites work like shears and are able to bite off extremely small fragments of wood, one piece at a time. Over time, they can collapse a building entirely, meaning possible financial ruin for a homeowner. If you suspect a termite infestation, contact a pest professional about subterranean termite treatment.

Signs of a Subterranean Termite Infestation

Through the use of thermal imaging we can detect termite activity in walls & ceilings before serious damage occursSwarmers. A subterranean termite infestation begins when warm temperatures and heavy rainfall trigger an established colony to send out a swarm of winged termites. Swarms consist of winged reproductive males and females. Subterranean termite colonies are usually active for three to five years before 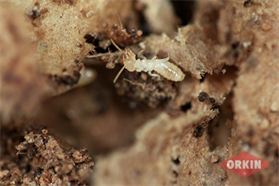 If you are constructing a new home, especially in a high-risk area, it is advisable that you obtain estimates from reliable professionals for termite-proofing your home. Pest control professionals are best equipped to take preventive measures, which could save homeowners from severe loss. Pest control experts will also be able to make recommendations that can help to prevent termite infestation.
There are over 2,300 described species of termite living today. Collectively, they are responsible for an average of $1 billion per year in property damages, infesting 350,000 structures.